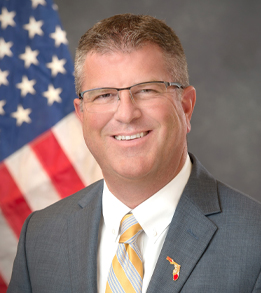 Bill Gladson was elected State Attorney for the Fifth Judicial Circuit in November of 2020. He is a former law enforcement officer and career prosecutor with over 20 years of trial experience. As State Attorney, Bill leads a team of over 250 employees who serve the citizens of Citrus, Hernando, Lake, Marion, and Sumter Counties, an area encompassing more than 1.2 million people.

A life-long Floridian, Bill graduated from the University of Florida in 1994 with a bachelor's degree in criminology and received his Juris Doctor from St. Thomas University School of Law in Miami in 1997. During his career at the State Attorney's Office, Bill has prosecuted all types of crimes, from misdemeanors, to capital murder cases. In 2005, Bill was promoted to supervisor of Lake County, and later served as supervisor of Sumter, Hernando and Marion Counties. In 2018, Bill was appointed to the position of Executive Director, where he oversaw a budget of nearly 20 million dollars and was responsible for the overall fiscal management of the Fifth Judicial Circuit State Attorney's Office.

Bill is a graduate of the National District Attorney's Association Career Prosecutor School in Charleston, SC, as well as the Florida Department of Law Enforcement's Senior Leadership Academy in Tallahassee. He is the former President of the Florida Criminal Justice Executive Institute Association and served two terms on the Florida Bar's Fifth Circuit Grievance Committee. Bill is currently on the Board at the College of Central Florida Foundation, where he serves on the Executive Committee.

Bill lives in Ocala with his wife Jennifer, a small animal veterinarian. They have two children, one in high school in Ocala and one who attends the University of Florida.